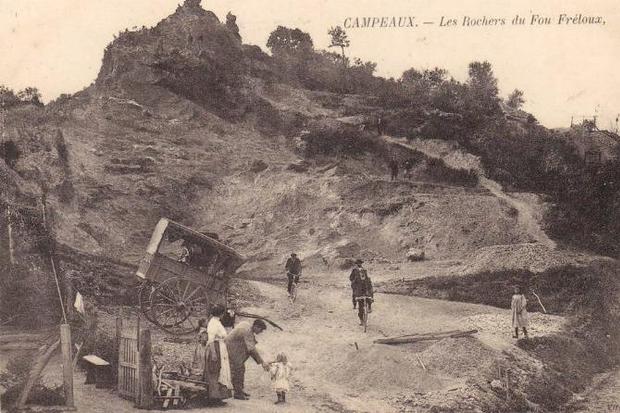 Stay at L'Auberdiere and Live the History of Normandie...

The local village of Campeaux was formally recognised in the 1860's, as a village settlement on the main route to the nearby industrial town of Vire from the town of Saint-Lo. The village is centred around the church, located in the centre of the high street, which passes down the hill through the middle of Campeaux, winding it's way towards further outlying hamlets and on to Vire. The following pictures show what Campeaux looked like during the 19th and early 20th Centuries:

As the Twentieth Century progressed, the peace and simplicity of rural life in Campeaux, changed forever with the Second World War. With the sacrifices of the previous generation in the trenches of World War One still raw in people's memories, the occupation by Germany was a heavy cross to bear. The beauty of the towns and villages across Calvados and the seasonal life of dairy farms and cider production were heavily damaged and in many cases completely destroyed in the allied invasion to liberate France from the Nazis. After four long years of occupation, during which time the Germans dug in and awaited the inevitable allied assault on 'Fortress Europe', the D-Day invasion and ensuing 'Battle of Normandy' took a heavy toll on the bocage countryside of Calvados. With it's impenetrable hedgerows and narrow country lanes, criss-crossed with rivers and steep rocky valleys; the region bore witness to some of the fiercest fighting of the war. With both sides increasingly aware of the importance of the main road links across Normandy and the fact that most towns straddled a major crossroads; the decision of the allies to use their overwhelming air superiority and the Germans to dig in and not yield the vital ground, proved too much for many of these local centres.

The Farmhouse, at L'Auberdiere, was built in the 18th Century using stone sourced from an ancient quarry; located just outside the local village of Campeaux. All buildings in the locality were constructed using the same materials and methods. As you drive through Campeaux and down the surrounding country lanes you will recognise the similarity of the stonework and familiarity of the architecture. The quarry still operates today and is vital in the maintenance and preservation of buildings such as those at L'Auberdiere en Normandie.

Following the liberation of Normandy and the end of the Second World War, an impoverished France sought to tackle the massive destruction of virtually all local and regional towns and centres. Despite experiencing the terror of such a destructive war, in such close quarters, life in rural Calvados picked up where it always had. Dairy herds were re-plenished, bakeries were re-built, towns were cleared of rubble and the detritus of war and life returned to it's traditional ways, yet in a new modern world. Today, the stunning architecture and history of buildings such as the farmhouse at L'Auberdiere and those villages and towns which survived the ravages of war; sit in harmony with the modern designs and re-generation that has taken place in the decades following World War Two. The following pictures show Campeaux today, as a thriving traditional Calvados village.